Nuclear physics is an area of research with great relevance for understanding the laws of nature. Among the main goals of the field are the understanding of the structure of atomic nuclei, as well as the mechanisms of nuclear reactions.
The knowledge acquired in nuclear physics results in a wide variety of practical applications, such as: production of electricity (in nuclear power plants), sterilization of food or packaging (by irradiation), materials engineering (identifying the composition of materials by irradiation or modifying their properties by implantation of ions), in the oil industry (where nuclear techniques are used for the characterization of biodiesel and studies of stability of the ocean floor), nuclear medicine (both diagnostic, X-ray, as in therapies, as cancer treatment by proton irradiation), etc.
In addition, knowledge of nuclear physics is used in research related to other areas, such as: archeology (e.g. through radiocarbon dating), botany (for example, using radioactive elements as markers), art (e.g. using radiation to determine the elements present in a work of art), agriculture (creating new varieties of plants improved by mutation process), telecommunications (in the investigation of radiation damages in satellites), etc.
The importance of nuclear physics to the basic knowledge of nature and the wide range of practical applications makes it an area of extreme strategic importance for the country. Thus, the training of human resources in the area of nuclear physics is of great importance for Brazil to continue to dominate technology. Students working in laboratories installed in universities specialize in a set of activities related to nuclear physics.
Each atomic nucleus contains certain numbers of protons and neutrons. The way these protons and neutrons are distributed in the nucleus is known as nuclear structure. In its ground state, an atomic nucleus can be permanently deformed (that is, it has a fixed, non-spherical form), or it can vibrate (its shape varies in time). In addition, the same core can exist in different states (corresponding to different energy levels). The nuclear structure determines the properties of the nucleus.
In the field of nuclear reactions, we try to understand what happens in a collision between two atomic nuclei. Several processes can result from these collisions. One of them is the elastic scattering, where the nuclei that emerge from the collision are the same ones that initially collided. Furthermore, in this kind of process, the conservation of kinetic energy is obeyed. Another possible process is the inelastic scattering. Here, again, the emerging nuclei are the same as the initials, but there is no conservation of the kinetic energy. This is because one (or both) core changes state, varying its internal energy. A third process occurs through transfer reactions. In this process, a proton, or a neutron, or even a group of them are transferred from one nucleus to another. Thus, a transmutation of chemical elements occurs. Another important process is the so-called nuclear fusion, when the two colliding nuclei merge into a single nucleus, which eventually can "evaporate" particles and gamma rays. In addition, other processes can still occur, such as the process where one core splits into two or more pieces when colliding with the other.

Our group conducts research both in the field of nuclear structure and in nuclear reactions. In fact, these two fields are interconnected because the structural properties of nuclei strongly influence how they react with other nuclei. We have made both theoretical and experimental contributions in these areas of research.
In the theoretical field, we have developed new models and improved existing models, in order to describe the structure of nuclei, nuclear interaction (force) between two colliding nuclei, and the mechanisms involved in the different reaction processes.
In the experimental field, we used the Pelletron accelerator, from the Open Laboratory of Nuclear Physics (LAFN) of the IFUSP, to conduct scientific experiments. In these experiments, an ion beam containing atomic nuclei accelerated in the Pelletron collides with a target consisting of other nuclei. The nuclei that emerge from these collisions are detected using some detection system. In this way, we measure elastic scattering, inelastic scattering, transfer, fusion and break up reactions. The results of the experiments are compared to the predictions of theoretical models, which allows to confirm (or not) the predictions, obtaining information that enables to improve these models.
Measurements of different processes usually require different detection equipment. Thus, our group also develops and enhances the detection systems that are used in our experiments. Currently, we have enough nuclear instrumentation to perform several experiments at LAFN, in order to obtain measurements for different reaction processes. 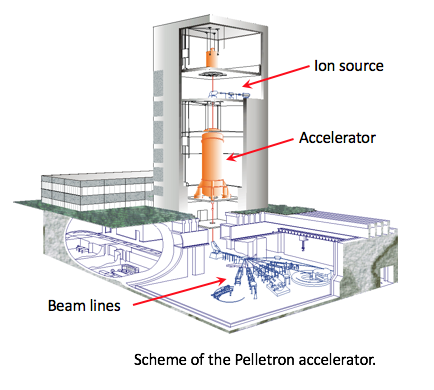 Our experimental setup consists of a scattering chamber installed at the LAFN 30B canalization, where two particle detection arrays are mounted: SATURN (Silicon Array & Telescopes of USP for Nuclear Reactions and Nuclear Applications) and STAR (Silicon Telescopes Array for Reactions). The SATURN consists of up to 18 surface barrier detectors, mounted on two different supports. In one of the supports, the detectors are mounted on a turntable, in intervals of 5o, covering a total angular region of 40°. In the other support, the detectors are fixedly mounted to the base of the chamber, every 10°, covering an angular region of 80°. The STAR system consists of 3 E-ΔE detectors (telescopes). One of them consists of a detector with a thickness of 20 μm, with 16 vertical strips (ΔE), and a detector of 500 μm (E). Another two are composed of 40 μm detectors with 16x16 strips (ΔE), followed by detectors with a thickness of 1000 μm (E). This system is often used to separate different reaction products, as each particle hitting the telescope, loses a fraction of its energy in the first detector (ΔE), and the remaining in the second (E). This allows identifying the number of protons of the detected nucleus.
Photos of the interior of the 30B scattering chamber located in the LAFN can be seen in the figure below. On the left side of the figure, it is possible to visualize the experimental setup available in 2016, where only part of the SATURN system existed. In addition, it is possible to spot the target holder and the collimator installed at the entrance of the chamber. On the right side of the figure, it is possible to see the SATURN system in its complete version, as well as part of the STAR system. This picture shows the experimental setup available in 2018.